The original of this document is here (Korean).

This blog post is a re-work of the amazing tutorial from Abdelrahman G. Abubakr on how to create your own object detector with Object Detection API from Tensorflow 2. I am following the same steps as the tutorial, but I did a little differently to fit my development environment and design system research. I want to thank the author for the original content and everyone who wrote it for reducing my trial errors.

Also I have to say that I have developed this experiment in my research time working at LINE corporation where I perform as a platform designer of Design system. 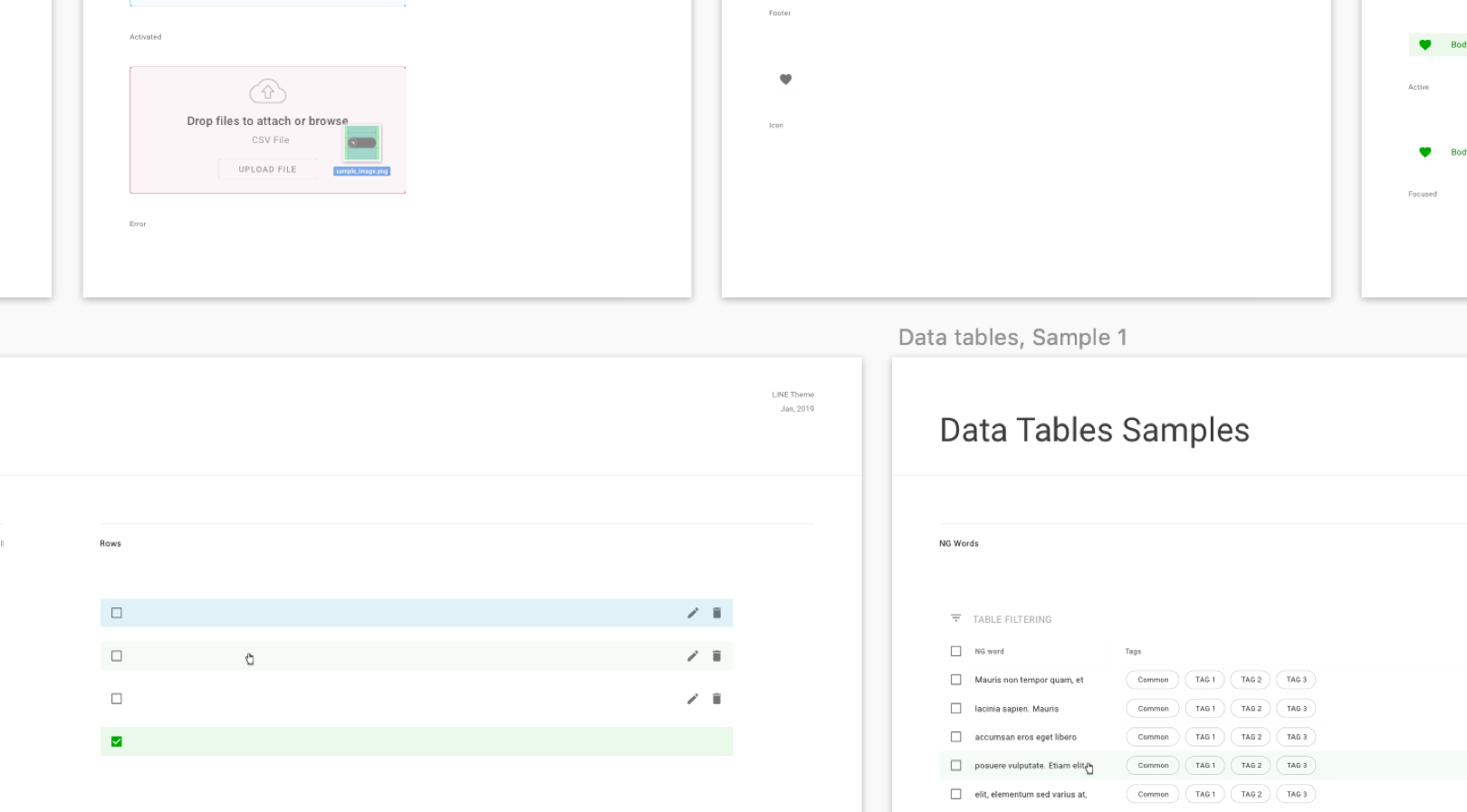 This idea started with my difficulty of creating a design system. The heart of the design system is to assemble design elements and create reusable libraries. But ironically, increasing resources in libraries (such as the Sketch symbol library), on the contrary, makes it increasingly difficult for designers to use in their design because the more complex the library, the more they have to learn, as well as the heavier the working environment.

As a design system manager, this was a serious challenge. So I thought, What if Sketch Assistant could automatically detect which UI components are being used on the artboard, and recommend designers to use library symbols through the Assistant? A simple flow is shown below:

After thinging the flow, I decided to start by creating a Custom dataset first.

Firstly, I set up the Python virtual environment and installed Tenserflow according to Tutorial of Abdelrahman G. Abubakr.

First, I used a virtual environment with direnv. It’s also okay to use Anaconda or other virtual env tools, but I personally prefer to use direnv because it’s comfortable to define the necessary settings for each directory via .envrc.

I can easily install it using Homebrew

Next, add it to the configuration file corresponding to shell. direnv officially supports BASH, ZSH, FISH, TCSH, Elvish, Check out the guide here, and add settings for your shell.

After adding the settings, reboot the terminal and you can use direnv.

Next, choose a folder you want to work at and create a directory named Tensorflow.

When a .envrc file is created, direnv will detect it and print a warning message. The reason is to prevent unwanted shell script execution from happening. Therefore, if we want to add or change the .envrc file, we must explicitly allow it.

Execute the allow command to allow the use of the .envrc file in the current directory.

Next, we will download the Python version to use using pyenv. Since I manage the virtual environment in direnv, I will only use pyenv for version control of Python.

A more detailed installation guide can be found at direnv wiki.

Refer to the Tensorflow official site and install Tenserflow in my Python virtual environment in the following way. (As of September 2020)

For reference, when I run the installation verification code (tf.reduce) on my MacBook Pro, the following message is displayed. Fortunately, the forums say we can ignore this now. https://github.com/tensorflow/tensorflow/issues/8037

Now open a terminal, go to the TensorFlow directory and clone the Tensorflow model repository.

You should now have a single folder named models under your TensorFlow folder, which contains another 4 folders as such:

After that, cd into TensorFlow/models/research/ directory and run the following command: If OK comes out, the test is successful :) Now create a new folder under TensorFlow and call it workspace. It is within the workspace that we will store all our training set-ups. Now let’s go under workspace and create another folder named training_demo. Now our directory structure should be as so:

The training_demo folder shall be our training folder, which will contain all files related to our model training. It is advisable to create a separate training folder each time we wish to train on a different dataset. The typical structure for training folders is shown below.

For our purpose we are going to use a bunch of images regarding with Button UI component. To do that as fast as possible we are going not only to extract button images from our symbol library but also to scrap google images with a python script to automate the process.

Scripts can be downloaded from: https://github.com/hardikvasa/google-images-download

and, for example, place the downloaded files in projects folder named as google-images-download. Then just navigate to the folder where the python script is and execute:

In order to label our data, we need some kind of labeling software. In this particular case we are going to use labelimg.

According to the rules of my design system, I created a label by classifying it into 4 categories: contained button, outlined button, icon button, and ghost button. It seems easy and repetitive task, but it’s super time consuming. In my case, I used labelimg to label about 200 images, which took over an hour.

Next, we need to create a label map, which namely maps each of the used labels to an integer values. We will put it in the training_demo/annotations folder with the name labelmap.pbtxt. Below we show an example label_map.pbtxt, assuming that our dataset containes 4 labels:

Thankfully, many pioneers have already created scripts to convert xml to record format. All we need to do in this phase is just download their Python script, save it inside TensorFlow/scripts/preprocessing, and execute commends below:

Once the above is done, there should be 2 new files under the training_demo/annotations folder, named test.record and train.record, respectively.

For the purposes of this tutorial we will not be creating a training job from scratch, but rather we will reuse one of the pre-trained models provided by TensorFlow. If you would like to train an entirely new model, you can have a look at TensorFlow’s tutorial.

The model we shall be using in our examples is the ssd_mobilenet_v2_320x320_coco17_tpu-8 model, since it provides a relatively good trade-off between performance and speed. However, there exist a number of other models you can use, all of which are listed in TensorFlow 2 Detection Model Zoo.

Clicking on the name of your model should initiate a download for a *.tar.gz file. and extract its contents inside the folder training_demo/pre-trained-models. our training_demo directory should now look as follows:

Now, let’s have a look at the changes that we shall need to apply to the pipeline.config file. Please refer to the two links below for more detailed settings.

Before we begin training our model, let’s go and copy the TensorFlow/models/research/object_detection/model_main_tf2.py script and paste it straight into our training_demo folder. We will need this script in order to train our model.

Now, to initiate our new training job, open a new Terminal, go to the training_demo folder and run the following command:

If everything was setup correctly the training should begin shortly. Then in the terminal you will see the log as below. Not surprisingly, time varies widely depending on the computer’s performance and the size of the pre-trained model. For my Macbook Pro 15 (2018-mid), it took about 2.5 hours to train 3000 steps. Please refer to it when you configure training.

the current loss gets logged to Tensorboard. We can open Tensorboard by opening a second command line, navigating to Tensorflow folder and typing:

Then a web page will be opened autometically at localhost:6006

Once your training job is complete, you need to extract the newly trained inference graph, which will be later used to perform the object detection. This can be done as follows:

After the above process has completed, you should find a new folder my_model under the training_demo/exported-models, that has the following structure:

The button that I use most frequently in the era of COVID-19 in here South Korea is the QR check-in function of NAVER/KAKAOTALK app. I video-recorded these screen-flow from my iPhone and tested whether our new machine learning model can find the button well. The test tool was used by copying the Abdelrahman G. Abubakr’s test script that I used above

BOOOOM! Of course, it’s not perfect, such as finding only 1 icon button… But Contained buttons like’OK’ and’Cancel’ are definitely finding! 🍺

The next step is to convert the newly created model to tensorflow js and make it available to Sketch assistant based on Node js. But this part requires another study, so I will take a break before proceeding.

In addition, I realized that the process of creating pre-trained model with custom dataset is a huge amount for individuals not to do alone. Instead, I decided to suggest design communities making a pre-trained model together via open source.

Looking at the examples in visualdata.io or [tf2 detection model zoo, there are many datasets that can be used in machine learning by numerous contributors, but unfortunately, there seems to be no dataset that detects UI objects yet.

Starting this blog post, If there is a chance, I will share my experiences with the communities in Korea and try to move on next together. If you are also interested in this project, thank you!! Please find me in the Facebook group below.